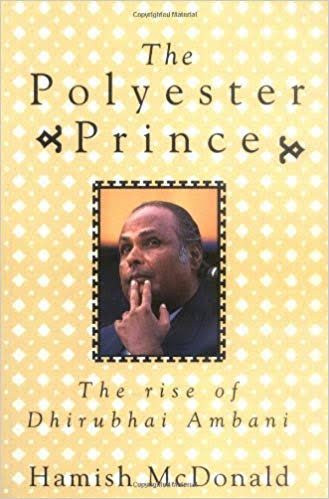 In a legal chamber lined with vellum bound case references, a senior lawyer took an equally stark view. “ Today the fact is that Ambani is bigger than the government,” said the lawyer in all seriousness. “He can make or break Prime ministers. ”

The Polyester Prince, a book published in 1998 by Hamish McDonald is an unauthorized biographical book on the life of the business tycoon, Mr. Dhirubhai Ambani. The man who re-defined business practices in India ignoring the ethical and moral aspects, leading to a company which today is one of the identities of how Modern India is seen across the globe, Reliance.

Hamish starts the book digging deep into the roots of the man in the center. It goes back to the days of Independence, the partition, Dhirubhai s upbringing, his culture and more on how his upbringing and roots had an impact on what his thoughts came out as he grew.

It highlights how the culture or community of what Ambani is; Modh Bania was perceived and how Dhirubhai was no different from it.

The book takes you to the days in Jamnagar. His relationship building, sustaining and using them at some point in his future. The old friends and acquaintances from Dhirubhai s old days eventually became his pillars of support in making Reliance a success.

The pages explain the rise of a young lad in Aden who decides to start his own business. With that vision, he moves back to India and with support enters the textile industry. Juggling into his trading, learning and unlearning things and screwed thinking, he rose high.

It highlights Dhirubhai s relation with Indira Gandhi, Rajiv Gandhi, Pranav Mukherjee, VP Singh, and even Harshad Mehta. His association with Syndicate bank and many more.

He was with all of them, either in a good way or bad but he was there. As quoted in one of the paragraphs by Dhirubhai, “I don’t know anyone will ever come to know, how much I was involved in bringing Indira Gandhi back” defines his involvement.

All his relations worked for him from time to time in profiting reliance. As Dhirubhai says, “I keep two sandals with me. Gold and Silver and as required, give it to the people. I can salute anyone for my work.” What highlights his business in those days was his shrewd mind of using the Bombay stock exchange for his own good. Not officially, but yes he ran it for his profit.

Policies were made and changed according to his wish, insider information used to reach to him before the announcement. The media was in his control, so where the policymakers. He defined Power. If there was one who can stand against him, there were 10 others to be with him.

Anyone who had the power to influence was with him. Either their children had business tie-ups with reliance or they had some shareholding in reliance owned companies.

The book highlights the making of the Reliance and rise of Dhirubhai Ambani along with the penalties, cases and many issues with its name in the center. Specifically talking about his wars with Nusli Wadia(Bombay Dyeing), The Indian Express and the sufferings he faced when the government went against him. But he rose out of all of that because he had money. And during the ’90s the power was shifting from politics to the one who can buy the power.

By the time things were about to get streamline, it left the entire structure of Government immune to corruption.

This can be the best book to understand what not to do in business or what should be done to rise in business. The unethical, malpractices and forgery of the Ambani empire is what highlights in defining Reliance. The author has done immense research and came up with a fine book of data and facts.

This, being my first book of 2020 provided pure entertainment for a reader. With ups and downs, drama and spice, this book shows how the Indian government was being used by someone who was not a part of the government but still ruled it. It could have been a masala entertainer but probably Bollywood might refrain to make it. (Relations matter !!)

I came across dialogue from a Bollywood movie, “Once upon a time in Mumbai.”

“Dawood does not live in Mumbai but still rules it.”

The same goes for this,

“Ambanis are not a part of the government or power. They are the power”